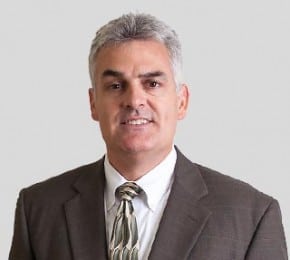 Andrew McCoppin was headed for a career as a criminal defense attorney even before he finished college at the University of California at Berkeley. Two key experiences helped shape Mr. McCoppin’s views of the legal system, steering him toward the path that would become his life’s work.

The first experience was the time Mr. McCoppin spent as a volunteer law clerk with the Orange County, California, public defender’s office. That opportunity allowed Mr. McCoppin to meet directly with clients who were accused of crimes. He saw attorneys in action as they developed their clients’ defenses and prepared their cases for trial. Mr. McCoppin saw first-hand the critically important role criminal defense attorneys play in the American justice system – as advocates for people accused of crime, but who are presumed innocent until proven otherwise, and against whom the full resources of the government are brought to bear.

Mr. McCoppin’s second experience was as a crime victim in a violent hostage situation. His own words describe the impact the dramatic event had on his life:

“In 1990, I was returning from the U.C. Berkeley undergraduate library after an evening of study. On the way home, some friends and I stopped by Henry’s Bar for a beer. Shortly after we arrived, gunfire erupted. Half of the patrons ran for the exits and the rest fell to the floor. The gunman fired randomly toward the exits to keep us from leaving. He shot eight people.

When everyone stopped moving, the gunman began placing people in the windows and doorways to act as human shields. Then, he reluctantly allowed some of the patrons to carry the injured out of the bar to receive medical assistance. During the seven hour standoff with police, we realized that the gunman was mentally ill. The details of what happened in Henry’s remain a private matter among the survivors.

The gunman instructed one of my classmates to turn a bar television to a local news channel. We all watched the local reports of the standoff. Simultaneously, we could see what was happening inside and outside the bar. We saw footage of police officers surrounding the block and onlookers restrained behind barricades. Unfortunately, the newscaster kept referring to the gunman as mentally unstable and even crazy. This made the police negotiator’s job very difficult and increased the tension within the bar tremendously. Later, a newscaster announced that one of the released hostages had died.

Seven hours after the first shot, a SWAT team stormed the bar, killed the gunman and freed the 40 some hostages. I was one of the last to leave and saw the gunman’s bloody body on the floor. My first-hand observations helped me see this tragedy from the perspective of each group of victims.

The victims who were shot or released early had a very different experience from the rest of us who sat through the whole event. I watched one hostage move from emotional devastation to recklessness after learning that one of our classmates had died. Each of us wandered through a minefield of emotions throughout that night. During the following weeks of group counseling provided by the University, I observed how some former hostages felt stronger for having survived, others felt lucky to have lived and some looked like they might be traumatized for life. All of this shaped my understanding of how violent crime affects its direct victims.

Other victims were less obvious. The police endured tremendous stress as well. Every officer who stormed the bar carried an assault weapon except one. Later, I learned that this officer carried only a sidearm because he was responsible for identifying and incapacitating the gunman. While the other officers spent hours practicing for the assault in a nearby parking garage, the remaining officer spent hours staring at a photograph of the gunman. In the end, the only officer who fired a shot was the one who emptied his sidearm into the gunman. After we were bused to the police station, one of the officers greeted us and said he had watched us through his rifle scope for hours. The relief on his face was unexpected.

My then girlfriend and now wife spent the night behind a police barricade watching everything from afar and my parents were on the first flight into Oakland to meet me the next morning. They struggled to support me and each other as their emotions swayed between fear and relief. When I learned that the gunman’s father knew of his son’s mental illness and had been searching for his son for months, I realized that the gunman’s family members were victims too.

Finally, the gunman was certifiably ill and had a long history of untreated mental illness. Without excusing his actions, his state of mind explained much of what happened. Understanding how serious mental illness pushed this delusional gunman to murder and kidnap strangers shaped my understanding of how misguided motives may affect people’s actions.

I realized that the victims, survivors, police officers, and families all had resources to support their recovery. However, who would have helped the gunman if he had survived? Traumatic events affect each person differently. I became a criminal defense attorney.”

Mr. McCoppin worked for a time as an assistant district attorney in Wake County, North Carolina, before committing himself to representing criminal defendants in private practice. In the more than 20 years since, Mr. McCoppin has aggressively and successfully represented people accused of criminal charges ranging from minor traffic violations – he’s helped clients resolve over 10,000 cases – to driving under the influence (DWI or DUI); violent crimes against others, including assaults and domestic violence; and complex white collar crimes.

He is now board certified by the North Carolina State Bar as a legal specialist in both State Criminal Law and Federal Criminal Law.

Mr. McCoppin’s success on behalf of clients proves the value of his approach in every case, which includes personally representing each client at all stages of the defense, and taking every step necessary to get the results his clients deserve. That means leaving plea bargains as a last resort – not a defense plan.

Andrew McCoppin has the experience and dedication to help in your case, no matter what crime you’ve been accused of. Give him five minutes – he’ll tell you how he can make a difference in your case.

Andrew McCoppin offers free consultations. From inside Research Triangle Park, including Raleigh, Chapel Hill, Cary, and Durham, or anywhere else in North Carolina, you can reach Mr. McCoppin by simply callingMcCoppin & Associates, Attorneys at Law, P.A., toll-free at 877-481-0011, or by using our convenient online contact form.