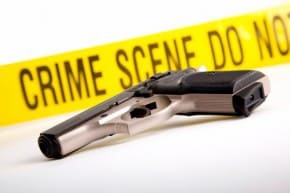 An assault is when one person tries to touch another person in a violent way without permission. A battery is a successful assault. North Carolina law combines assault and battery into a single offense called assault. It can be a punch, push, smack, spitting at someone, throwing something at someone, etc ., The circumstances surrounding an assault may greatly affect your case at court.

Several affirmative defenses may excuse or justify your actions including:

Let us use our years of experience defending people to help you avoid or minimize your risk of incarceration.

Robbery is taking property from a another person. Robbery without the threat of violence is called Larceny From A Person. It is a Class H felony punishable by up to 30 months in prison. If the Robbery included the threat of violence, then it is a Class G felony punishable by up to 38 months in prison. If a dangerous weapon was used, then the robbery is a class D felony with a mandatory presumptive sentence of 51 months in prison. For a Class D felony, probation is unavailable, even for a first offender. For the exact same crime, some people may receive long prison sentences and others may receive probation depending upon how their lawyer presents the case to the prosecutor, the jury and the judge.

Other violent offenses include the following:

At McCoppin & Associates, Attorneys at Law, P.A., we provide an aggressive defense for people charged with crimes of violence. We understand how the prosecution handles these cases, and we know the defense tactics and arguments that are most effective. Don’t leave your future in the hands of just any attorney; contact a Cary criminal defense attorney today at 919-481-0011 to schedule a free initial consultation to discuss your case. Hablamos español.